Abraham Benjamin (AB) de Villiers (born 17 February 1984 in Pretoria) is a South African former cricketer and the captain of One Day International team.

He has the 10th-most total centuries scored (47) among all international cricketers. 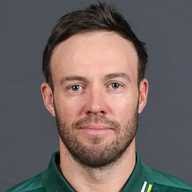 He has been married to Danielle de Villiers since the year 2013.

In December 2013 he became the ninth batsman in history to top the batting rankings in both Tests and ODIs.

2014 he was ranked as the second-highest run-getter for South Africa in both the formats, behind Amla.