Abdul Khoza (born 14 August 1987) is a South African actor and musician who shot into limelight after winning the second season of the SABC1 reality competition Class Act, in 2011. 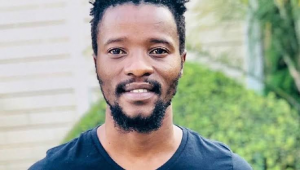 His father is the National President of the Independent Municipal and Allied Trade Union. Sthembiso Khoza is is brother. Sthembiso is a popular actor, musician, radio presenter, and TV host.

The actor is married to Batile Themane. The couple met for the first time at a mall in 2018, where he helped her to find a parking spot

He tied knots with the love of his life in a memorable traditional wedding on 27th April, 2019.

He served in the army of South Africa for four years upon completing school and later worked as a fireman for three years. The actor quit his fireman job after the big win to focus on acting.

In 2013 he landed his first starring role as Two Step, a rising soccer star who lives in the dappled suburb of Parktown with his fiancée, in the second season of the SABC1 drama series Intersexions.

Khoza has an estimated net worth of $1 million which he has earned from his career as an actor.