Bev Ditsie (born 1971) whose full name is Beverley Palesa Ditsie is a South African lesbian activist, artist, filmmaker and is one of the founders of the gay rights organization, Gay and Lesbian Organization of Witwatersrand. 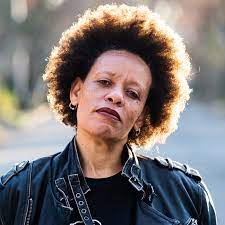 She was born in the year 1971 in Orlando West, Soweto, South Africa.

Ditsie has been working on television as an actress and director since 1980, making her the first black female kid star on the network.

She was the only black lesbian on the reality show Livewire – Communities, which aired in the late 1990s.

She’s also written, directed, and consulted on more than 20 documentaries that have played across the country and internationally. Simon and I (2001), her debut documentary film, won a number of Audience Awards, including the 2004 Oxfam/Vues d’Afrique best documentary award in Montreal, Canada.

Simon and I is an autobiographical novel that chronicles her “emotional and political journey” with Nkoli. Her film incorporates both interviews and vintage footage.

She has an estimated net worth of $200,000 which she has earned as an activist, artist, filmmaker.