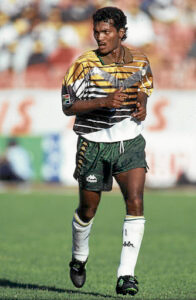 He played for South Africa national football team and was a participant at the 1997 FIFA Confederations Cup, 1998 African Cup of Nations and 1998 FIFA World Cup.

In the latter, Augustine was sent home, along with Naughty Mokoena for breaches of discipline after breaking curfew set by coach Philippe Troussier.