Connie Chiume (born 5 June 1952), is a South African actress with Malawi descent. She is best known for the roles in the films Black Panther, Black Is King and Blessers as well as in television for Zone 14 and Rhythm City. 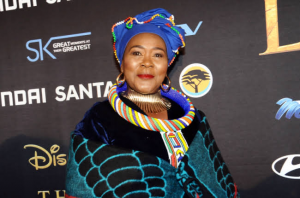 Her father Wright Tadeyo Chiume was from Usisya, Nkhata Bay, Malawi and mother MaNdlovu hailed from KwaZulu-Natal, South Africa. Her father died in 1983 in Malawi in his homeland. She spent her early years at Welkom, where she also attended her school. Then she moved to East Cape for her Matric. However, she did not complete her nursing course as she wanted to train as a teacher. With that passion, she graduated in teaching in 1976. After few years of teaching, she resigned and traveled to Israel. Later she moved to Greece to start acting career. Her mother died in March 2020.

Her cousin, Ephraim Mganda Chiume is a Malawian politician.

Connie is married in 1985 and divorced in 2004. She is a mother of four: two sons and two daughters.

After moving to Greece in 1977, she started to act in her earliest works such as Porgy and Bess, Ipi Ntombi, and Little Shop of Horrors. In 1989, she appeared in the television series Inkom’ Edla Yodwa after returning to South Africa. She played the role of ‘Thembi’ in that series. After the success of the series, she was invited to play in the film Warriors from Hell in 1990, which made her maiden cinema appearance. In 2000, she won the Connie the Avanti award for Best Actress in a Drama Series during South African Film and Television Awards (SAFTA) festival.

In 2005, she played the role ‘Stella Moloi’, on SABC1 drama series Zone 14, where she won the Golden Horn award. With the serial became very popular, she continued to play the lead role until 2010. She also received the Award for the Best Supporting Actress in a Drama during the 3rd SAFTA. In 2015, she appeared in the soap opera Rhythm City with a motherly role as ‘Mamokete Khuse’. The show became highly popular in South Africa.

In 2006, she played the lead role in the stage plays such as You Strike The Woman and You Strike The Rock. In 2020, she starred in the television drama series Gomora with the role ‘Mam’Sonto Molefe’. In the same year, she also appeared in another television series Black Is King. In the series, she played as a fussy mother. In October 2020, she was honored with first Feather Award nomination.

In 2018, she appeared in the Hollywood blockbuster film Black Panther renowned South African actor John Kani. She played the role of Mining Tribe Elder in the film.

Chiume has an estimated net worth of $500 000 which she has earned from her career.