Ramaphosa was born on the 17th November 1952 to Erdmuth and Samuel Ramaphosa in Soweto South Africa. He is from the Venda tribe, one of the smallest tribes in South Africa.

In this post, you will get to discover many things you didn’t know about Cyril Ramaphosa and his political career. 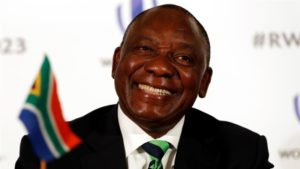 He had been married to late businesswoman Nomazizi Mtshotshisa and together they had a daughter but the couple divorced. Ramaphosa is married to Tshepo Motsepe who is a medical doctor and the sister of billionaire and mining magnate Patrice Motsepe.

Ramaphosa is known to have four children. A daughter with his late ex-wife and four other children.

He owns a luxury mansion worth R30 million at the foot of Lions Head Cape Town.

Personal Assistant to the President

Assistant Private Secretary to the President

He is co-chairperson of the Advisory Board of the Kagiso Shanduka Trust, which is in partnership with the Free State Department of Education on a programme to develop schools in the province.

South Africa’s new president Cyril Ramaphosa earns a salary of $252,700 annually making him one of the highest paid leaders in Africa. Ramaphosa publicly declared in South Africa on 24 May 2018 that he would be donating half of his salary to charity in honor of late former South African president Nelson Mandela.