Dawn Faith (born 16 January 1982) is an author, musician, speaker, social activist and the host of her own TV show titled Deep & Meaningful. 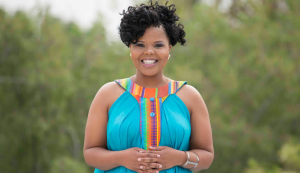 She is married to Nic Mackay. Faith currently lives in Johannesburg with her Australian husband Nic Mackay and their son, Lwandle Mackay.

She started her music career in 2008 working with local artists in South Africa and has since released her debut EP in 2015 titled “Audience of One”.

In 2016, she established a TV production company, MYZIZI Productions, named after her daughter Zinhle (Zizi) Grace, who was born around four months premature and died aged three months in Melbourne, Australia.

Having embraced her innate talent as a singer and songwriter, Mackay is now using her own music to reach and inspire people around the world. She is regularly asked to perform both acoustic and with a full band at all manner of events – weddings, parties, concerts, and award shows.

She has done so in some of the world’s most revered venues such as the Sydney Opera House, and alongside legendary artists like Yvonne Chaka Chaka.

Her first single, “Messed Up Heart”, was produced by Jason Heerah (Electric Empire) and Dorian West (X Factor, Australia’s Got Talent) – and helped make Mackay the No. 1 artist in Melbourne and No. 7 in Australia on the ReverbNation R&B/Soul charts.

It was followed by her highly anticipated debut EP, “Audience of One”, which was written and produced by Mackay herself. In a departure from the sounds that often dominate Christian music, the EP is a collection of songs that defies classification but defines ‘soul’ – seamlessly integrating elements of jazz and gospel, with lyrics that are both confronting and uplifting.

It was inspired by the death of her daughter, the birth of her son, and the journey between these two life-changing events.