Die Antwoord is a popular South African rap group that was formed in 2008. The group, which consists of two artists: Ninja and Yolandi Visser, has been releasing music since 2009.

They have released four albums so far with a host of hit singles and have headlined several international tours in Europe and other parts of the world. 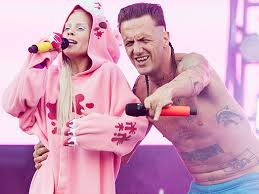 Together they have a daughter named Sixteen Jones. She was born in the year 2005.

The popular rap group is one of the richest in South Africa and they have an estimated net worth of $100 million.

Thousands of fans woke up to an email from Ticketmaster early in September informing them that South African hip-hop collective Die Antwoord’s Sept. 24 show at Toyota Music Factory was “still on, but has been rescheduled.”

The show will now take place in May 2020, but ticket holders needn’t distress — their tickets are “still good,” according to the email.

Die Antwoord, whose main members are Watkin Tudor “Ninja” Jones and Anri “Yolandi Visser” du Toit, uploaded a video to their website shortly after this announcement. In the video, titled “A MESSAGE FOR U,” Ninja states: “We’re busy with so much fucking shit at the moment.”

He goes on to list all their current projects, including a new album and a “feature film,” that are dropping in 2020 before continuing, “Our people booked this tour for us in America before then, and we’re like … fuck.”

Basically, that they’re too busy to come all the way over to America right now and would rather us be the first to hear them perform material from the new album scheduled for next spring.

But let’s be real here. We all know what’s been going on with them lately and the more likely motivation behind this tour “postponement.” In case you haven’t been following along, here’s the gist:

The group’s former cameraman recently came forward with a video he shot during a festival in Australia back in 2012. The 11-minute video shows bits and pieces of an altercation between members of Die Antwoord and gay musician Andy Butler.

One of the most disturbing and controversial things about the video is that Yolandi can be heard in the background cheering on the fight and shouting things like “Run, faggot, run!” Toward the end of the altercation, she can even be heard laughing hysterically after Ninja hit Butler —  that is, until Ninja tells her to stop.