Here is all you need to know about Dieketseng Mnisi profile….

Dieketseng Mnisi is a South African actress known for playing the role of the pastor’s wife Masechaba Moletsane on the SABC2 sitcom Stokvel. 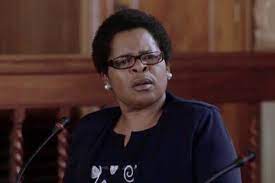 She is well recognized for her role as Ma Ntuli in the SABC1 drama series Skeem Saam and has appeared in a number of other shows such as Yizo Yizo, Zone 14, and Intersexions.

In the episode “Deep Secret” of the e.tv anthology series eKasi: Our Stories in 2013, she played Nokufa, a devil worshipper who sacrifices her own daughter to achieve greater dark power.

Disclaimer: Unlike other sites, We can not guarantee that the information publish above are 100% correct. We’ll always tell you what we find, Therefore the details about the Biography of Dieketseng Mnisi can be updated without prior notice.

However, If you have any queries regarding Dieketseng Mnisi Biography, kindly Drop a Comment below and we will respond to it as soon as possible.