Dikeledi Magadzi is a South African politician who currently serves as the Deputy Minister of Transport of South Africa. She assumed office on 30 May 2019. 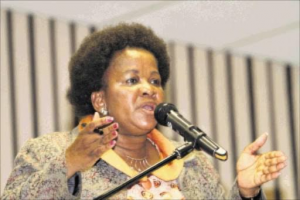 Magadzi was a Member of the Executive Council for Public Works, Agriculture and Safety and Security in the Limpopo Provincial Government between 1994 and 2010.

She is married with five children and two grandchildren

Magadzi has an estimated net worth of $300 000 which she has earned from her career.