Nyiko Floyd Shivambu (born 1 January 1983) is a South African politician serving as a member of parliament for the Economic Freedom Fighters.

Shivambu is the Deputy President of the Economic Freedom Fighters, its Parliamentary Chief Whip in the South African Parliament, who serves in the Trade and Industry Portfolio Committee and the Standing Committee on Finance.

He is also a Member of the Pan African Parliament, serving in the Rural Economy, Agriculture, Natural Resources and Environment Committee. 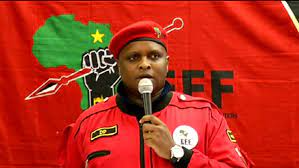 He announced on the 6th of  February 2018 that he has been accepted by the Wits School of Governance to pursue a doctoral degree with his thesis focused on SA’s transformation policies, legislation, and practices: ownership and control of JSE-listed companies.

After rounding up his secondary school in 2001 at Mphambo High School in Malamulele in 2001, he proceeded to the University of Witwatersrand in Johannesburg where he earned a bachelor’s degree as well as an Honours Degree in Political Studies and International Relations.

He initially intended to become a technician, but he later changed his career focus. Shivambu went on to graduate with a master’s degree, with distinction, in political studies in 2014.

Floyd Shivambu is married to Siphesihle Shezi-Shivam and he has only one child Katekani Shivambu.

Shivambu career in politics can be traced back to his time in the University when he was elected president of the university’s Student Representative Body and joined the African National Congress Youth League in his third year.

He is a Member of the Portfolio Committee on Trade & Industry and the Standing Committee on Finance in the RSA Parliament.

Shivambu is also part of the RSA Parliament’s permanent delegation of 5 to the Pan African Parliament, serving in the Rural Economy, Agriculture, Natural Resources and Environment Committee. Floyd Shivambu in summary:

Shivambu has co-edited a book about Malema titled The Coming Revolution. He has been a blogger since 2005 and has published several articles on his platform: floydn.blogspot.com.

He has an estimated net worth of R10 million which he has earned as a politician.