Here is all you need to know about Fulu Mugovhani profile….

Fulu Mugovhani (born 7 September 1990 in Thohoyandou) is a South African actress. best known for her starring role as Ayanda. 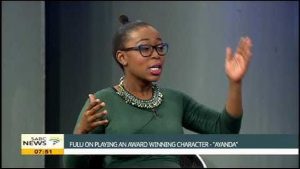 She was born on the 7th of September 1990 in Thohoyandou, Limpopo, South Africa. As of 2020, she is 30 years old and celebrates her birthday on September 7th every year.

In June 2018, she married her sweetheart, Timi Modibedi, a DJ and record producer.

Mugovhani played Nala in an international production of the musical The Lion King in 2012. She received her first television part in the miniseries Remix in 2013, as well as a role in the soap opera Scandal! in 2014.

Mugovhani acted as the lead in Sara Blecher’s film Ayanda, which was released in 2015.

Mugovhani has a recurring role in SABC 3’s soap drama Isidingo in 2017. In the same year, she starred in the soap opera Ring of Lies as Rendani, a Musangwe fighter who, despite her strict father’s wishes, chases her ambition of becoming a champion boxer. She portrays a mother and wife in the series Still Breathing, which premiered in 2020.

She has an estimated net worth of $500,000 which she has earned as an actress.

Disclaimer: Unlike other sites, We can not guarantee that the information publish above are 100% correct. We’ll always tell you what we find, Therefore the details about the Biography of Fulu Mugovhani can be updated without prior notice.

However, If you have any queries regarding Fulu Mugovhani Biography, kindly Drop a Comment below and we will respond to it as soon as possible.