Jabu Mahlangu (born 11 July 1980) is a former South African professional footballer who played as a midfielder for the South African National team.

He played for clubs such as Kaizer Chiefs, Orlando Pirates, Supersport United amongst others. Mahlangu is a motivational speaker, SS 4 analyst and a MassivMetro Presenter. 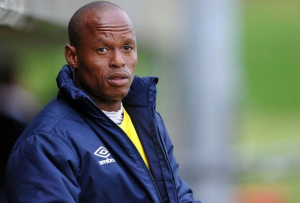 Mahlangu’s wife is Twhana Songame Mahlangu. In the height of his professional football he impregnated the Twhana Songame while she was still in high school. The couple became a couple and have four children together.

Although being considered a hugely talented, he often had numerous off-field and disciplinary issues in the past. Most of his troublesome behavior was attributed to drinking alcohol.

Kaizer Chiefs was Pule’s first club, where he was perennially in trouble for his wayward behaviour but forgiven on countless occasions because of his importance to the team. But Chiefs’ officials lost patience with Pule and refused to give him a new contract when it ended in 2004.

His fortunes were no different as he only lasted eight months before he was sent packing. Jabu was asked to leave the club after crashing his car while under the influence of alcohol.

Twice sent to a rehabilitation clinic to overcome his drinking and drugs problem, Pule was sacked by SuperSport United late 2005 after missing several training sessions.

But Irvin Khoza, chairman of Orlando Pirates, decided to take a chance on the former South Africa international, who has been kicked out at his three previous clubs.

In early 2006, Jabu Pule changed his surname to Mahlangu, the name of his deceased father.

Pule left the country on 23 June 2008 to Sweden for trials with Helsingborgs IF and fellow Swedish clubs IF Limhamn Bunkeflo and Östers IF after training under the guidance of Farouk Khan at his academy in South Africa.

He completed 13 games for Östers IF in Division 1 Södra, helping bring the team to the verge of promotion into Superettan, while showing none of the problematic behaviour that had previously marred his career.

In February 2010, Jabu returned to Växjö to try and secure a long term deal with now Superettan newcomers Östers IF. On 18 February he signed a one-year contract with the club.

Mahlangu has an estimated net worth of $2 million.