Jeff Koinange (born 7 January 1966) is a Kenyan journalist and host of Jeff Koinange Live, a talk show on Citizen TV since February 2017.

He is also the host, alongside Professor Hamo, of the breakfast show at HOT 96, the English-language station owned by Royal Media Services.

He is a judge representing Kenya at the new East Africa’s Got Talent, which premiered on 4 Aug 2019. He served as the Africa correspondent for CNN and CNN International from 2001 to 2007, and later as chief reporter at TV station K24 from 2007 to December 2012.

Before joining KTN, he worked with KTN on his branded news program, Jeff Koinange Live. He had earlier served as the chief anchor Africa for Arise Television Ltd based in Johannesburg. He joined East Africa’s Got Talent as a judge alongside Gaetano Kagwa, Makeda and Vanessa Mdee. 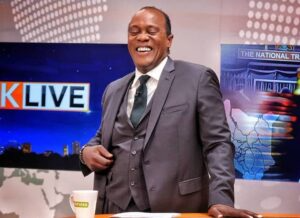 Koinange was born in Kenya and worked with Kenya’s first independent television channel KTN Kenya Television Network. Between 1987 and 1989, he attended Kingsborough Community College in Brooklyn, New York, and graduated with an associate degree. He also received a Bachelor of Arts degree in broadcast journalism from New York University.

Included among the more significant stories Koinange has covered for CNN in Africa were the crisis in Darfur, the civil wars in Liberia and Sierra Leone and the famine in Niger, for which he won an Emmy award.

In early 2007, Koinange was reprimanded by the government of Nigeria for his coverage of the Movement for the Emancipation of the Niger Delta (MEND). In his report, Koinange accompanied masked MEND guerillas to a camp where they were holding a number of Filipino hostages. The Nigerian government said that the report was “staged”, a charge CNN denied.

He has also covered news outside of Africa, including extensive reporting on the aftermath of the Hurricane Katrina crisis in the US and the Iraq War.

On 29 May 2007, CNN announced that Koinange was no longer employed by the network.

Seven months after leaving CNN, Koinange was hired as a news anchor by a new Kenyan TV station, K24, which began test transmissions in Nairobi in December 2007. He was the host of Capital Talk Show. He now hosts ‘Jeff Koinange Live’, a talk show aired on Citizen TV Kenya, part of Royal Media Services.

Book: Through my African eyes

In his autobiography, Through My African Eyes, published in 2014 by the Footprints Press Kenya, Koinange describes his school days and his career climb to be one of Africa’s most recognised journalists. Despite being a public figure, he has kept a lot of his personal life private, and the book serves as a window into his life.

Koinange has been very prominent in giving back to the community in different ways. In 2017, he began an initiative to develop and stock a library in the Kibera slums where students from the neighbourhood can gain access to reading material.

He has also done notable speaking engagements, such as at the Journalism In Africa forum, organised by a community organisation called Fatuma’s Voice in 2016.

He has an estimated net worth of $200,000 which he has earned as a journalist.