Here is all you need to know about Johan Ackermann profile….

Johan Ackermann (born 3 June 1970) is a South African rugby union coach and former player who played as a lock during his playing career between 1995 and 2007. 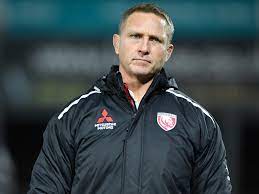 He is married and has two sons and a daughter.

At the age of 37, Johan Ackermann became the oldest Springbok to play for the national team in 2007. He was recalled to the Springbok squad after the 2007 World Cup in France to face the Barbarians. This was his final appearance as a member of the international team.

In 2013, he was named head coach of the Lions Super Rugby and Golden Lions Currie Cup teams.

Prior to the 2017–18 season, he was named head coach of English Premiership side Gloucester.

He departed Gloucester at the end of June 2020 to take over as head coach of the Red Hurricanes of Japan.

He has an estimated net worth of $500,000 which he has earned as a rugby union coach and former player.

Disclaimer: Unlike other sites, We can not guarantee that the information publish above are 100% correct. We’ll always tell you what we find, Therefore the details about the Biography of Johan Ackermann can be updated without prior notice.

However, If you have any queries regarding Johan Ackermann Biography, kindly Drop a Comment below and we will respond to it as soon as possible.