Kamogelo Molatlhoe (born 25 February 1995) is a South African actress that is best known for her role as Keamogetswe in the e.tv soapie Rhythm City.

She had her Bachelor of Dramatic Art at the University of the Witwatersrand, graduating with Honours in 2017.

Kamogelo has acted in various theatre productions including Poetry Overload vs. Sketching, which had a run at the Market Theatre in Johannesburg.

She has experience in sound tech, which she trained at Wits for, and now I am a house sound technician at the Grahamstown Arts Festival. She is a girl with a vision. 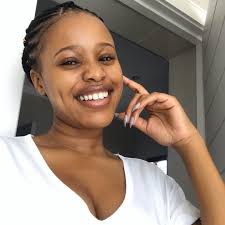 She made her television debut in a “Living Positive” segment of the SABC1 youth programme Bona Retsang, in 2015.

She landed the role of Tshepang, an energetic girl who is willing to do anything in life, in the first season of the SABC1 drama series Ingozi, in 2017.

In the year 2019, she got the role of Keamogetswe, Reneilwe’s (Amo Chidi) younger sister, on the e.tv soapie Rhythm City, making her first appearance on 27 February 2019.

Later that same year she landed her first starring role in television when she was cast as Cebile in the SABC2 telenovela Lithapo. The show debuted on 13 January 2020.