Khaya Dlanga is a South African author, blogger. He is also the Senior Communications Manager for Content Excellence and Digital at Coca-Cola. He is a highly regarded author and social commentator. 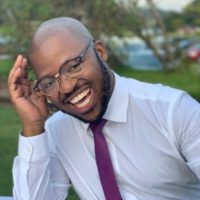 He was born in the year 1990. We are not sure of the particular day and month.

He is currently dating Nokukhanya Khanyile, though no one is sure if they will finally get married. He posted about her during her birthday

YOUR BEAUTY IS OF COURSE THE STUFF OF LEGEND. EVEN ME… I AM STARTING TO LOOK RELATIVELY HANDSOME NOW BECAUSE OF YOU.

In 2012 Khaya published “In My Arrogant Opinion” as part of Picador Africa’s The Youngsters series. This was followed by another titled “To Quote Myself in 2015”.

To Quote Myself was shortlisted for the Alan Paton Sunday Times Non-Fiction Prize. The book is most noteworthy a South African bestseller.

He has received many advertising awards, including several Loeries, a Gold Cannes Lion. He also received Black Eagle and honorary membership at the Wits University Chapter’s Golden Key Award.

We will update information about his net worth very soon.

First of all, you can certainly find him in his official social media sites below. Similarly, you can also e-mail him at khayav@gmail.com