King Zwelithini (born 14 July 1948) was the eminent king of the Zulu nation in South Africa. He ascended the throne on the 3rd of December, 2971 after the death of his father in 1968. 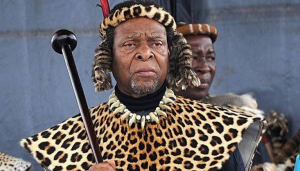 His grandfather was King Phumuzuzulu kaDinuzulu who lived between 1890 and 1933 and ruled from 1913 to his death.

Goodwill Zwelithini kaBhekuzulu became the king in 1971 after the death of his father in 1968.

He did not become the king immediately because he was in St. Helena taking refuge to avoid being assassinated, so from 1968 to 1971, Prince Israel Mcwayizeni kaSolomon was the regent.

Eventually, Zwelithini became the eighth Zulu monarch in a ceremony held at Nongoma, which was graced by around 20,000 people.

The King has 28 children in total from his six wives.  The eldest child is Prince Lethukuthula Zulu, the child of Sibongile Winifred Dlamini. He was born on the 23rd of September 1974. He is currently studying International Studies (degree) in Florida.

Here are the names of King Zwelithini’s children:

King Zwelithini had been in the hospital for weeks for what was initially reported to be a problem with his blood glucose levels. He died on the 12th of February 2021. The news was confirmed in a statement from the royal house on Friday morning.