Kobamelo Kodisang (born 28 August 1999) is a South African footballer who plays as a midfielder for Portuguese club Braga B. 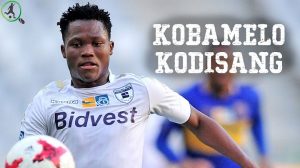 He joined the Platinum Stars youth team and initially received media attention after an impressive performance at the 2014/15 MultiChoice Diski Challenge tournament.

He was called up to the senior squad for the 2015–16 season and made his professional debut on August 26, 2015, in a 2-0 win over Golden Arrows, replacing Robert Ng’ambi.

He became one of the youngest players to ever play in the Premier Soccer League at the age of 15 years and 363 days and the youngest in the last six years.

Sanjoanense, a Portuguese club, signed Kodisang on a season-long loan move on September 28, 2018. He joined S.C. Braga B. in mid-August 2019.