Lance Davids (born 11 April 1985) is a South African former professional footballer who played as a midfielder for the South African National team. 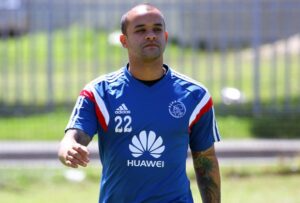 Born in Cape Town, Davids hails from Mitchell’s Plain on the Cape Flats. In 1999, Davids went for trials with Budgie Byrne with Arsenal and Manchester United

Recruited from the Cape Town based club Hellenic F.C. at age 15 by TSV 1860 Munich, Lance Davids is a youth product of the Bavarian club to which he transferred in 2001. He made his professional debut on 22 November 2003 in a 1–0 loss to Bayern Munich.

Lance Davids made his debut in the German 2. Bundesliga in the 2004–05 season, playing for 1860 Munich making 21 league appearances before transferring to the Swedish Djurgårdens IF from Stockholm.

Davids came to Djurgårdens IF from 1860 Munich in Germany at the start of the 2006 season but had a tough time establishing himself as a starter at the beginning of the season. However, as the season went on, Davids became a regular name in the Djurgården starting line-up.

During the 2007 season, Davids played on the right as a midfielder or as a defender.

In December 2007, he trialled with two English Premier League clubs, Blackburn Rovers and Newcastle United, but no transfer materialised.

In early 2009, he signed as a free agent with South African champions SuperSport United on a short-term contract. He made his debut on 4 February 2009 in a 3–0 over Bay United.

After one year with Ajax Cape Town F.C., Davids signed on 11 June 2010 for Lierse SK on a free transfer.

He was Lierse’s first transfer of the 2010–11 Belgian First Division campaign. He made his debut on 31 July 2010 in a 1–0 loss to Sint Truident with a Vincent Euvrard.

On 31 January 2013, Ajax Cape Town confirmed the signing of their former player from the Belgian club along with fellow South African international Mabhuti Khenyeza.

Lance Davids made his debut for South Africa on 30 March 2004 against Australia in a 1-0 defeat at Loftus Road, London. His last international was a 4–0 win over Thailand on 16 May 2015.

He has an estimated net worth of $500,000 which he has earned as a professional footballer.