Linda Buthelezi (born 28 June 1969) is a South African former footballer who played as a midfielder at both professional and international levels. 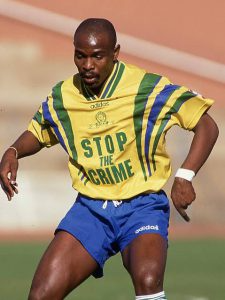 He has an estimated net worth of $200,000 which he has earned as a professional footballer.

He also earned 27 caps for the South African national side between 1994 and 1997. He was part of the squad that won the 1996 African Cup of Nations and made unwanted international headlines in 1997 when a tackle on Paul Gascoigne saw the English midfielder stretchered off.