Magda Wierzycka (born 14 October 1969) is a South African businesswoman and anti-corruption activist of polish origin. She is a billionaire known to be the richest woman in South Africa.

She is the co-founder and Chief Executive Officer (CEO) of Sygnia Ltd, a Cape Town-based financial services company involved in asset management, stockbroking and administration services. 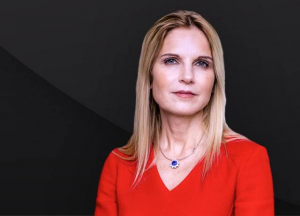 Wierzycka was born in Gliwice and grew up in Jastrzębie-Zdrój, Poland. She lived with her parents, who were medical doctors, her grandmother and her siblings in a 2 bedroom flat.

The collapse of the Polish economy forced her family to move to Austria in 1982 where they lived for a year in the Polish refugee camp at Traiskirchen. They eventually migrated to South Africa in 1983 and settled down in Sunnyside, Pretoria. Wierzycka was only 13 years old.

She couldn’t speak English and had to learn English and Afrikaans. She worked at a supermarket to make ends meet during high school before obtaining a bursary to study actuarial science.

She attended Pretoria High School for Girls. In 1993, she graduated from the University of Cape Town with a Bachelor of Business Science and a Postgraduate Diploma in Actuarial Science.

Wierzycka is married to Simon Peile. He co-founded Sygnia with her in 2016 and they collectively have roughly 30% ownership of Sygnia. They have two children together.

Wierzycka worked as a product development and investment actuary for Southern Life Association for Mutual Life and Accident Insurance in 1993. In 1997, she became a director and Head of Institutional Business at Coronation Fund Managers.

In 2003, Magda was named CEO of the African Harvest Group. She co-founded Sygnia Ltd in 2006 and later became its CEO. The company’s assets increased from R2 billion to R162 billion during her tenure, making it South Africa’s second largest multi-management company.

In October 2015, Sygnia Limited was listed on the Johannesburg Stock Exchange (JSE.)

In March 2021, Wierzycka announced that she is down as co-CEO of Sygnia as she focuses on pursuing overseas opportunities and developing her own investment vehicle.

From June 2021, David Hufton, who was appointed deputy CEO in 2018 before joining Wierzycka at the helm of Sygnia last year, will take over as sole CEO.

Wierzycka’s estimated net worth in 2018 was R1.108 billion. The billionaire business woman reportedly earns an annual salary of R3.339 million.