Mandla Mandela whose birth name is Zwelivelile “Mandla” Mandela is the chief of the Mvezo Traditional Council and a member of parliament for the African National Congress. He was born in 1974 in Orlando, Soweto in South Africa. 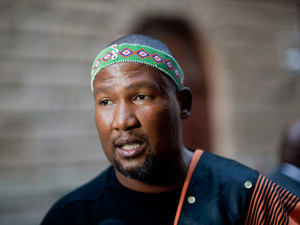 He was born in 1974 in Orlando, Soweto in South Africa. Mandla was born to Makgatho Mandela ( a son of Nelson Mandela) and Rose Rayne Mandela-Perry.

In June 2004 he got married to Tando Mabuna-Mandela who is filing for divorce. He married his second wife Anaïs Grimaud, a French citizen in March 2010. In September 2011 she gave birth to Qheya II Zanethemba Mandela. He denied paternity, claiming it was the result of an affair with his brother in August 2012.

On 24 December 2011, he got married his third wife Mbali Makhathini (Nodiyala Mandela). He married his fourth wife on 6th February, Raabia Clarke in an Islamic ceremony in Cape Town. About two months prior to the wedding, Mandela converted to Islam.

“A rose has been plucked from our garden of heroes. One whom we all called Nobandla‚ Mangutyana‚ Mam Winnie or simply Mummy is no more and we are left with the thorns of loss‚ memory and as a nation‚ a deep sense of sadness.

Mam Winnie has been a shining sun‚ a guiding star‚ an immovable mountain‚ a mother to generations of freedom-fighters; one who has rallied together young and old‚ rural and urban‚ men and women; her power swayed our resistance to apartheid in the darkest moments when other leaders were languishing in jail or in exile; she had the ability to rouse the ocean of internal resistance to a frenzied boiling point and within a moment calm it down. Today‚ the scroll of her extraordinary life is laid open for all the world to see.

What a humble beginning from her roots in the rural village of Mbongweni‚ Bizana‚ in the Transkei to the world stage where over the last week tributes have unendingly poured out for one who lived a full life; a life dedicated to the struggle for the liberation of our people. Mangutyana was an international symbol of our resistance to apartheid and played a pivotal role in rallying the Global Anti-Apartheid Movement to isolate the Apartheid regime and ultimately secure the release of my grandfather and other political prisoners.

She was at the same time a rallying point for the marginalized poor black township and rural residents who demanded their freedom. Comrades and friends; we shall never forget her resistance to the brutality‚ harassment and atrocities of the Apartheid regime. Despite their best efforts they could not prevent‚ discouraged or stop her from championing the anti-apartheid cause and being the voice for millions of our people. This bravery‚ courage and determination in the face of all odds led to her periodic imprisonment from 1969‚ much of it spent in solitary confinement.

Not even years of banishment to Brandfort could silence her. They tried everything‚ even burning down her house, but she proved why she is regarded as “Mother of the Nation”. unwavering‚ resilient and irrepressible and always at the heart of the struggle.

Comrades and friend; the monumental life of uNobandla must be a rallying point to continue our struggle for the suffering masses of people in our country and the world; Today‚ Mam Winnie’s name is echoing in Gaza and other parts of occupied Palestine. Today her life and struggle are being celebrated in Western Sahara. Our struggle is far from over.

It is no co-incidence that UMangutyana has become an icon and rallying point for our comrades in the EFF. It is our collective duty to stand for the poor‚ the voiceless‚ and the landless; South Africa awaits the radical economic transformation that our freedom and new democracy has promised. We shall not rest until the prophetic words of the Freedom Charter and our Constitution is fulfilled: “We‚ the People of South Africa‚ declare for all our country and the world to know: that South Africa belongs to all who live in it‚ black and white.”

Comrades and friends; it seems that these words fell on deaf ears this weekend at the DA Congress as the protectors of white privilege continue to place impediments in the course of land transformation and redistribution. Mam Winnie’s life demonstrated that our people will not be moved; our revolution will not be compromised and the land shall return to the people!!

As we pay tribute here in the Western Cape to the life of Nobandla‚ an undisputed hero of our struggle and a revolutionary leader in her own right‚ we also owe it to her legacy to rebuild a strong movement‚ a strong alliance and a powerful force for serving our people.

Finally‚ it is fitting to conclude in this year in which we observe the Nelson Mandela Centennial Celebrations to pay tribute to one who played an important part in Madiba’s life; whose words encouraged and sustained him in the long and dark hours of incarceration; whose rousing voice elevated our spirits in our call to free Mandela Campaign; and at the moment when he walked out of Victor Verster Prison a free man‚ she stood triumphantly by his side‚ fist held high.

A rose has been plucked from our garden of heroes;

But we shall not abandon the struggle and what you and all our heroes stood for. Your life is the best tribute and speaks for the millions who will attest:

For I was hungry and you gave Me food;

I was thirsty and you gave Me drink;

I was a stranger and you took Me in;

I was naked and you clothed Me;

I was sick and you visited Me;

I was in prison and you came to Me.