Maria Ramos (born 22 February 1959) is a South African businesswoman, banker, and corporate executive who has been serving as the chairperson of AngloGold Ashanti since 2020. 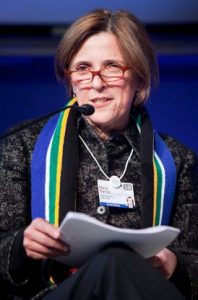 In 2008, Ramos got married to South African politician Trevor Manuel.

From 1996 to 2003, Ramos was the Director-General of the National Treasury. Until February 2019, she served as the Chief Executive Officer of Absa Group Limited for ten years. She was in charge of implementing the Group’s strategy across ten African operations, which served 15 million clients through over 11,000 locations.

She has formerly served on the boards of Sanlam Limited, Remgro Limited, and SABMiller Plc as a non-executive and independent director, and she presently serves on the board of Richemont SA.

She has an estimated net worth of $2 million which she has earned as a businesswoman.