Mmamoloko matriculated from Thusa Setjhaba High School, and she has a degree in Vista University, Soweto campus. 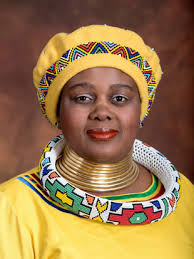 Her date of birth and age is not known as she prefers to keep her private life away from the public.

She is married to Joel Sihle Ngubane. Her husband wanted to look like a pilot on their wedding day so he wore a unique combination of an airforce pilot’s wings and a sailor’s cap.