Monica Geingos (born 1 January 1977) is a Namibian entrepreneur, a lawyer who has served as the First Lady of Namibia since 2015. 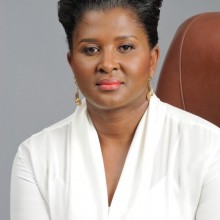 She was born on the 1st of January 1977 in Ondonga, Namibia. As of 2021, she is 44 years old and celebrates her birthday on January 1st every year.

On February 14, 2015, Geingos married Namibia’s then-President-elect, Hage Geingob, just before he was sworn into office.

She was named one of Namibia’s 12 most prominent individuals in 2012, and she was named one of Africa’s 100 most influential women in 2020. Geingos is a University of Namibia graduate who worked for the Namibia Stock Exchange (NSX) in Windhoek for the first few years of her career.

Geingos is the managing director of the financial undertaking Stimulus and the General Director of Point Break. He formerly served as Chairman of the Board of eBank Namibia.

She has an estimated net worth of $1 million which she has earned as a businesswoman.