Pam Tshwete is a South African politician that has been a Member of Parliament since 2002 and a Whip since 2004. She is the Deputy Minister of Water and Sanitation. 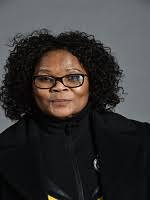 Information about her date of birth will be updated later.

She has a Nursing Diploma with many years of experience in primary health care. She has also received training in advanced courses in public administration offered by the National Parliament of South Africa.

She has been an MP since 2002 and a Whip since 2004.  Her past parliamentary positions have been Chairperson of PC Arts & Culture; Chairperson of Ad hoc Committee on Filling of Vacancy on Commission for Gender Equity; Whip for PC Joint Monitoring Committee on the Improvement of Quality of Life & Status of Women; Women’s Caucus. She was also active in the ANC Women’s League National Executive Committee; Eastern Cape REC; and was exiled.

Information about her husband will be updated.