Patrice Motsepe (born 28 January 1962) is a South African billionaire mining magnate. He is the founder and executive chairman of African Rainbow Minerals and also the current CAF President.

He was born to Augustine Motsepe (Father) and Key Motsepe (Mother). Patrice is the brother of Tshepo Motsepe and brother in law of South African President Cyril Ramaphosa.

He has a Bachelor of Arts from the University of Swaziland and a Bachelor of Law from Wits University. In March 2021, he emerged new president of the Confederation of African football. 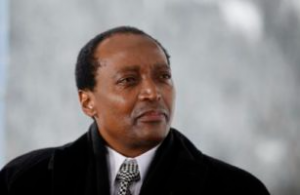 Motsepe is married to Dr. Precious Moloi-Motsepe, and together they have three children.

Precious is a leading businesswoman, physician, entrepreneur, and also a philanthropist in South Africa. In 2012, she was named one of the country’s Most Influential Women.

Together with wife Precious Moloi, Motsepe has three children. He has three sons who are named Thlopie, Kgosi, and Kabelo Motsepe.

He purchased a house in the exclusive suburb of Bishop’s court in Cape Town for R69 million in 2013.

He recently bought one of his children a Supercharged B7 Audi RS4 and he also owns a private jet.