Here is all you need to know about Pebetsi Nolo Matlaila profile…. 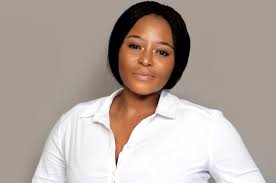 She was born on the 8th of November 1986 in Polokwane, Limpopo. As of 2020, she is 34 years old and celebrates her birthday on November 8th every year.

In 2003, she graduated from Capricorn High School in Polokwane. She went to acting, presenting, and production school after high school. She graduated from the University of South Africa with a Bachelor’s Degree.

She is happily married to TV producer Lloyd Mbatha and has a daughter named Oarabile.

She previously worked as a radio host for Capricorn FM and other stations.

She became a series regular in Season 6 after joining the Skeem Saam cast in Season 3. It was her first time in front of the camera as a professional actor.

Disclaimer: Unlike other sites, We can not guarantee that the information publish above are 100% correct. We’ll always tell you what we find, Therefore the details about the Biography of Pebetsi Nolo Matlaila can be updated without prior notice.

However, If you have any queries regarding Pebetsi Nolo Matlaila Biography, kindly Drop a Comment below and we will respond to it as soon as possible.