Simon Keys (born 15 July 1974) is a popular snake catcher and a TV personality who has spent a lot of his time educating people about snakes through his Nat Geo show — Snake City. 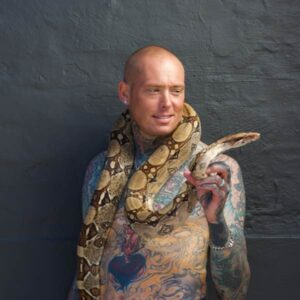 He was born on the 15th of July 1974 in England growing up in Hertfordshire where he still spends six months every year. As of 2020, he is 46 years old.

Simon got married to Nadine Keys who was originally from South Africa, and they finally relocated to Durban, South Africa in 2005. He is currently in a romantic relationship with Siouxsie Gillett who is also his co-host in Snake City.

His love for animals started while he was a young child. He was fascinated by the Nat Geo Wild shows which included the ones hosted by the legendary Steve Irwin. He grabbed all sorts of small animals frogs, newts, and lizards during the weekend.

On a fateful day, while relaxing outside his house, he saw a green snake fall from a tree, and it slid into his neighbour’s garden. He informed his neighbour and requested to help remove the snake for him. This brought about the need for such services in South Africa.

He is also a tattoo artist. Simon has a tattoo business that is known as Taipan Tattoos, which is located in the UK. His tattoo shop operates only based on appointments. He fancies this mode of operation because his services are eccentric, and he has a very tight schedule.

He has an estimated net worth of $300,000 which he has earned from his involvement in snake catching.