Thandi Mahambehlala is a well known South African politician and the Deputy Minister of Communications. She is a former Deputy Chairperson of the ANCYL (Dullah Omar Region).

She was the ANC Youth League Branch Secretary and a Cape Town Youth Development Council Executive Member from 2000 to 2004. From 2004 to 2008, she served as the Deputy Chairperson of the ANCYL (Dullah Omar Region), Secretary of the Samora Machel Project Committee and was elected as the Western Cape ANCYL Provincial Secretary in 2008. 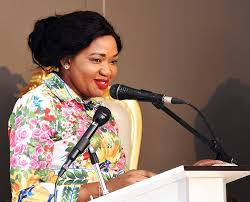 She has also participated in several local and international conferences, including the following:

How did you become involved in politics and particularly, what drew you to your specific party?

Thandi Mahambehlala: I grew up at a time when political activism was at its height in the 1980s. It came naturally for me to become involved, especially in the townships where I grew up. I was also so fortunate that our elder brothers and sisters who were already at universities like UNITRA, now Walter Sisulu University, would come and educate us about their struggles there. During their visits, they gave us books to read and I chose to read The Struggle Is My Life by Nelson Mandela. This book made me realise that sacrifices and determination are key. It described the kind of South Africa we lived in then and its systems. When I read the book it was clear to me the kind of South Africa Nelson Mandela, Walter Sisulu and Oliver Tambo envisioned. I had no choice after reading the book but to associate myself with the ANC, which wanted to give us freedom and a South Africa that belongs to all. I grew up with no confusion – knowing the ANC of Mandela and the UDF.

How did you then become an MP for the party?

Thandi Mahambehlala: Branches of the ANC nominated me, and these branches saw it fit that I become an MP by voting during the List Conferences of the Party. It is not an individual decision to become an MP, but rather a collective decision taken by all branches.

What does your job as an MP entail?

Thandi Mahambehlala: I have a constitutional mandate to conduct oversight at all organs of state, including those at provincial and local government level. My jobs entail law-making, formulation of Bills, regulation and policy implementation. Apart from the aforementioned, MPs must participate in debates and are assigned to various committees by their parties. Currently, I’m serving in the Portfolio Committee of Energy, ANC Strategy and also served in the Nkandla Adhoc Committee.

What are your thoughts about the Fifth Parliament so far?

Thandi Mahambehlala: As a new Member of Parliament I find it very interesting. The perception out there was that MPs sleep and they are lazy readers and this is not the case. I’m motivated by the fact that for each task assigned to me I have to do some research, reading and preparation. The fact that I am able to learn and get empowered every day – I can safely say it is quite interesting.

Thandi Mahambehlala: I am assigned to Khayelitsha, but not the entire area. We are three MPs from my party assigned to that area. Each one of us has specific wards under her/his constituency but this doesn’t mean you cannot assist where necessary. There’s a lot of work I have done so far, including poverty alleviation programmes, community development, sporting activations and many programmes that speak to the upliftment of the communities around my PCO. Last year I launched the Annual OR TAMBO Soccer Games, which happens every October. Its aim is to show young people that we are a caring organisation that gives recognition to those who are less acknowledged. It is also aimed at taking the youth off the streets and it somehow motivates individuals who are coaching the teams voluntarily. I have also assisted in a number of cases where families couldn’t give their loved ones a dignified send-off or funeral because of affordability or unemployment in the family. When a person loses their identity document or birth certificate I also intervene. Community development in general and youth involvement is most interesting to me.

What are you most passionate about – this applies both in a political/professional arena as well as personally?

Thandi Mahambehlala: I am so passionate about community development. My work as an MP and my political home with its policies help me to implement, monitor and evaluate the work that I do towards uplifting communities. Making a contribution to other people’s lives is what keeps me going. My other passion is education. I am one of those that have been disadvantaged because education was a privilege, and I am only catching up now as an adult with resources at my disposal.

Nelson Mandela said education is the most powerful weapon you can use to change the world. With this in mind and with all the resources at my disposal I will stop at nothing. Political activism is my life and I have always been rebellious about addressing inequalities in my community and surroundings. Taking up community issues and challenges have always been the centre of my being.

What would your message to South Africa be?

Thandi Mahambehlala: My message to South Africa, especially South African youth is that the revolution is alive. As ANC Youth League alumni I stand with the students that took to the streets proclaiming #FeesMustFall. I also pledge my support because free education will give an African child a chance to live. Unfortunately many in our country come from poor households and education is the only hope.

I applaud the young leaders from our universities; I am beyond proud of the Nompendulos and the Mcebos of our country who are keeping the revolution alive and their message is loud and clear. Let’s join hands together towards attaining free education in our country. With this in mind, I am reminded of the words of the first black President of the Republic of South Africa, Dr Nelson Mandela when he said: “The truth is that we are not yet free; we have merely achieved the freedom to be free, the right not to be oppressed.

We have not taken the final step of our journey, but the first step on a longer and even more difficult road. For to be free is not merely to cast off one’s chains, but to live in a way that respects and enhances the freedom of others. The true test of our devotion to freedom is just beginning.” The struggle continues!!!!!