Tebogo Mekgwe (born 20 March 1988) known as Pinky Girl is a South African Reality TV personality who rose to fame after appearing on the first season of Being Bonang.

After her appearance on the show, she was interviewed by Tshisa LIVE and has gone on to amass over 200,000 Instagram followers.

She is also known as Pinky Girl and for her education, she studied computer science after high school and worked in information technology.  She quit her job after seven years due to the reality TV show. 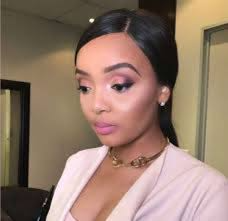 Her cousin is Bonang Matheba who is a South African television presenter, radio personality, businesswoman, producer, model and philanthropist.

Tebogo “Pinky Girl” Mekgwe has left some of her fans heartbroken after a recent tweet.

The “Being Bonang” breakout star revealed on Tuesday that she is in love. She tweeted: “It’s so amazing to be in love”.

She has an estimated net worth of about $1 Million – $5 Million. She earned this money from being a professional Reality Star.