Thanduyise Abraham Khuboni (born 22 May 1986 in Clermont, KwaZulu-Natal) is a South African footballer who currently plays for Uthongathi. 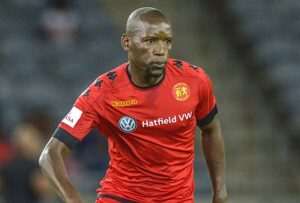 Khuboni spent his youth career at a number of local amateur clubs before joining Golden Arrows in 2006. He was part of the Arrows team that won the 2009 MTN 8 Cup. Khuboni played in every minute of Arrows’ 30 games in the 2011–12 season.

In January 2013, Khuboni was linked with a transfer to an unnamed German Bundesliga club as his contract was expiring at the end of the season. Arrows subsequently exercised a 1-year option they had on his contract, thus tying him to the club until the end of the 2013–14 season.

Khuboni made his international debut for South Africa on 27 January 2010 in a 3–0 victory against Zimbabwe in a friendly match played in Durban.

He was part of the South African squad for the 2010 FIFA World Cup and played in their final group stage match against France.