Thomas Walters (born 30 January 1976) is a South African politician of the Democratic Alliance (DA) who has been serving as a Member of the National Assembly of South Africa since May 2014. 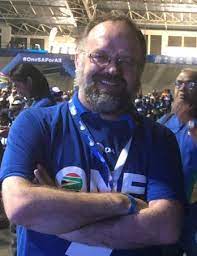 Thomas Walters graduated from the University of Stellenbosch with a Bachelor of Arts in Political Science. He also completed the Wits Business School’s Management Advancement Programme.

He went on to earn a master’s degree in business administration from the Gordon Institute of Business Science and the University of Pretoria’s Business School.

In April 2009, Walters was elected to the Gauteng Provincial Legislature. He was named the party’s Agriculture and Rural Development Provincial Spokesperson.

Walters defeated John Steenhuisen for the position of Deputy Chairperson of the Democratic Alliance Federal Council in November 2012.

After James Selfe announced his retirement in October 2019, Walters indicated his desire to run for the DA Federal Council chairpersonship. Helen Zille came out on top in the election.

At the DA’s elective conference in October 2020, he was re-elected as a deputy chairperson of the Federal Council. James Masango and Ashor Sarupen are now his coworkers.

He has an estimated net worth of $2 million which he has earned as a politician.