Thulas Nxesi (born 1 January 1959) is a South African politician who currently serves as the Minister of Employment and Labour.

He has previously served as the Minister of Public Works, Minister of Sports and Recreation and Deputy Minister of Rural Development and Land Reform. 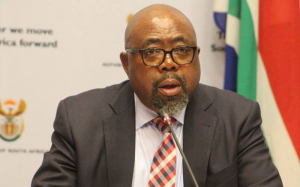 Nxesi is married to Sesi Nxesi, the CEO of Education Seta. He had a daughter called Lona Nxesi, who died in June 2012 in a tragic car accident.

Nxesi was a teacher at Ikusasa Senior Secondary School from 1985 to 1990, during which time he was also the head of the social sciences department.He has also served as Assistant Secretary-General and Secretary-General of the South African Democratic Teacher’s Union from 1990 to 1994, and for a second term from 1994 to 2010 respectively.

During the apartheid years he became involved in politics from a young age and was expelled from school several times for involvement in political activities.

Nxesi served as the Minister of Public Works of the Republic of South Africa; a position he was first appointed to on 24 October 2011, and reappointed to on 26 May 2014 until 30 March 2017.

Nxesi has an estimated net worth of $500 000 which he has earned from his successful career.