Tshegofatso Mabaso whose full name is Tshegofatso John Mabaso is a South African professional footballer who plays as a striker for PSL club Orlando Pirates. 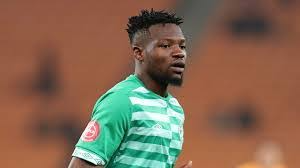 His first career club was Bloemfontein Celtic. He made his first-team debut for the club during a 2014 Telkom Knockout match with AmaZulu on 4 October. This was followed by his professional league debut in the South African Premier Division in May 2015 against Free State Stars.

He made thirty-one appearances for the club in total in his first four seasons. During this period, he also scored his first senior goals, netting in Telkom Knockout ties with Platinum Stars and Polokwane City in November 2017. He got his first goal in league action on 5 August 2018 in a 2–0 win over Chippa United.

Mabaso has also represented the South African national team at senior level, winning his first cap during a 2018 African Nations Championship qualifier versus Zambia on 19 August 2017.

He is worth over 5.6 million rands. Details about his salary will be updated very soon.