She had her Secondary education at Nthema Secondary School and attends the University of North West where she studies Sports Science. 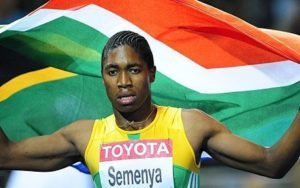 She married her long-time partner Violet Raseboy on 7th January 2017 in an extravagant white wedding.

The event was attended by the couple’s friends, relatives, scores of local celebrities and athletes, followed by a traditional ceremony.

It was also a national record and a championship record. Semenya simultaneously beat the Senior and Junior South African records held by Zelda Pretorius at 1:58.85, and Zola Budd at 2:00.90, respectively.

In August 2009 he won gold in the 800 metres at the World Championships with a time of 1:55.45 in the final setting a record at that time of the year.

In March 2010, Semenya was denied the opportunity to compete in the local Yellow Pages Series V Track and Field event in Stellenbosch, South Africa, because the IAAF had yet to release its findings from her gender test.

On 6 July she was cleared by the IAAF to return to international competition. She returned to competition nine days later winning two minor races in Finland.

In 2012 Summer Olympics opening ceremony he was selectedto carry the country’s (South Africa) flag. She won a silver medal in the women’s 800 metres, with a time of 1:57.23 seconds

Semenya set a new personal best for the 400m of 50:40 at the 2016 Memorial Van Damme track and field meet in Brussels.

She has an estimated net worth of around $500,000 which she has earned as an athlete.