Jacques Nienaber (born 16 October 1972) is a South African rugby union coach who is currently the head coach of the South Africa national team. 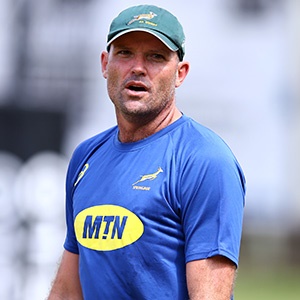 He is a trained physiotherapist who has worked with the Free State Cheetahs, a provincial rugby union side based in Bloemfontein, since 1997.

He took over as Strength & Conditioning Coach for the Free State Cheetahs in 2004. When former South African national team flanker Rassie Erasmus took over as head coach in 2005, he continued in that position.

Prior to the 2008 season, Nienaber relocated to Cape Town to join Erasmus’ staff as Director of Rugby at Super Rugby franchise the Stormers and Currie Cup club Western Province, where he also served as a defensive coach.

In 2012, he returned to domestic coaching with the Stormers and Western Province, where he had his first taste of success as the team won the Currie Cup.

He has an estimated net worth of $1 million which he has earned as a rugby union coach.