Skolopad whose real name is Nonhlanhla Qwabe is a South African house and kwaito musician, dancer and a nurse by profession. She was born in 1984 in South Africa.

She studied nursing at Ladysmith Nursing College and started to work from 2008 till now in Sehlabeng. 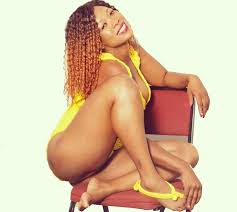 She was born in the year 1984 in South Africa. Her particular date of birth is what we do not know of.

She has a daughter who is seventeen years old as of 2018. Her daughter’s name is Amohelang. Skolopad says that most of her nude photos are taken by her daughter. She also says that her daughter was her motivation to build the Skolopad brand.

Her daughter told her that since she is a good dancer and she had been doing it for other people she should dance to her songs and from there she started selling her branded caps, T-shirts and other clothing.

Skolopad shares photos of injuries from the hospital bed.

Cape Town – Local entertainer Nonhlanhla “Skolopad” Qwabe shared photos of the injuries sustained to her legs and face with The Juice.

She was recently involved in a car accident after losing control of her vehicle while driving to QwaQwa.

“I was with my daughter and two other people in the car. Both my legs were injured, and my car is beyond repair,” Skolopad told drum.

A source at Mediclinic Hoogland in Bethlehem told DRUM that Skolopad was admitted to the hospital on 22 September.

Speaking to The Juice the 35-year-old said: “I am doing much better now. I can move around with crutches.”

The singer, who recently said yes to becoming the second wife to her now fiance, says he is taking the accident very hard.

“He was here last week the moment I got out of the ICU. He is coming to see me again this weekend, and he is being very supportive,” she said.