Here is all you need to know about Vinette Ebrahim profile….

Vinette Ebrahim (born 21 February 1957) is a South African actress and playwright known for her role as Charmaine Meintjies in 7de Laan. 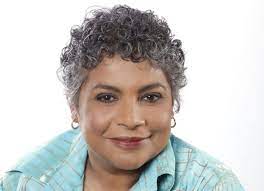 Vinette Ebrahim has appeared in theaters and theatre festivals all around South Africa, including Suidoosterfees and the Klein Karoo Nasionale Kunstefees. She appeared in an Afrikaans-language production of Athol Fugard’s play Boesman en Lena at the Klein Karoo festival in 2007. For her work as Lena, she won the Kanna Award for Best Actress.

Disclaimer: Unlike other sites, We can not guarantee that the information publish above are 100% correct. We’ll always tell you what we find, Therefore the details about the Biography of Vinette Ebrahim can be updated without prior notice.

However, If you have any queries regarding Vinette Ebrahim Biography, kindly Drop a Comment below and we will respond to it as soon as possible.